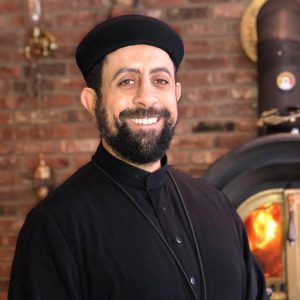 Father Michael Sorial has served as our priest and pastor since St. Anianus launched in central New Jersey in 2013. His teaching style encourages believers to apply the ancient Christian faith as understood in the Holy Scriptures into their everyday life.

Ordained as a priest in the Coptic Orthodox Church in 2005, Fr. Michael served for 8 years in Queens, NY prior to establishing St. Anianus Church – a multi-cultural Coptic Orthodox Christian parish – in central New Jersey.  In addition, he is co-founder and President of the Agora University and serves as the Director of the Office of Public Relations for the Coptic Orthodox Archdiocese of North America.

Father Michael believes that his marriage to his wife Mora in 2003 – along with their 3 beautiful children – are gifts from God that allow him to grow in his own walk as a disciple of Jesus Christ, while at the same time using those real life experiences to help connect the Gospel to those he serves.

Access all of Father Michael’s messages free of charge

Update Personal Details
Your ticket for